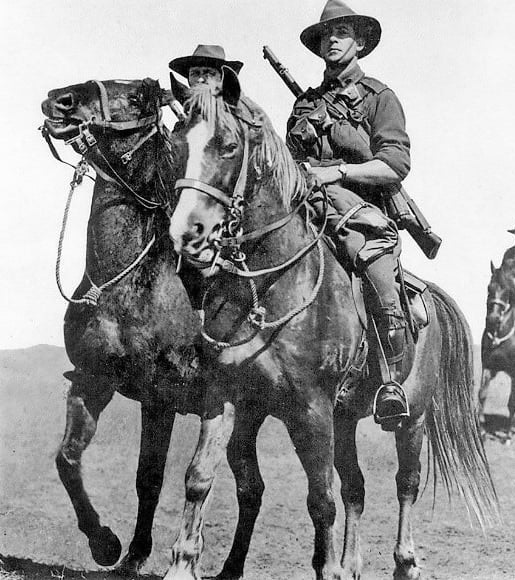 One of my favourite photographs.

The photograph is of Australian light horsemen riding Waler horses.  The soldiers are of the original contingent of the Australian Imperial Force and the photo was taken prior to their departure from Australia in November 1914.

The soldier on the right is Trooper William Harry Rankin Woods, 1st Light Horse Regiment, who died of wounds on the 15th of May 1915, one of the first light horsemen to die during the Battle of Gallipoli.

Some information and photograph came from Wikipedia. 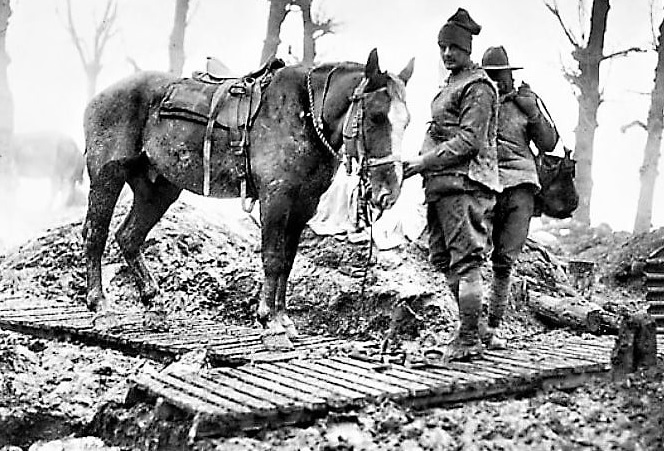 The photograph was taken in December 1916, of an artillery horse used for transporting ammunition to the guns and its unidentified Australian driver on a duckboard track on the Western Front. 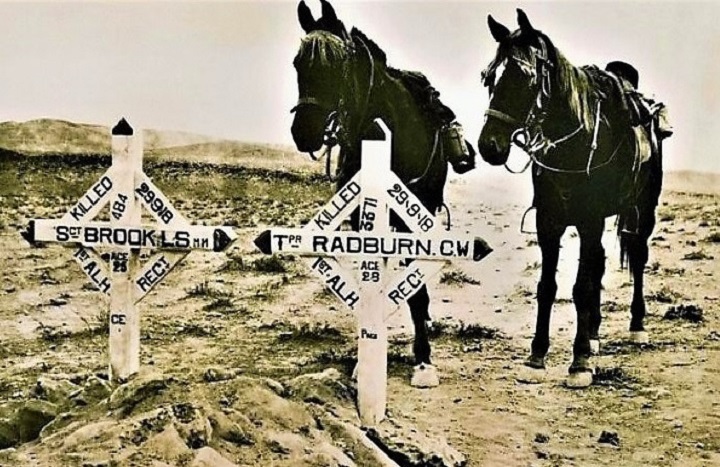 One of the most unforgettable photographs that captures the incredible bond between soldiers and their horses.

The loyal and courageous horses of two fallen Australian light horsemen stand behind their graves.  Both men were killed when they were ambushed by Turkish soldiers on the 29th of September 1918. 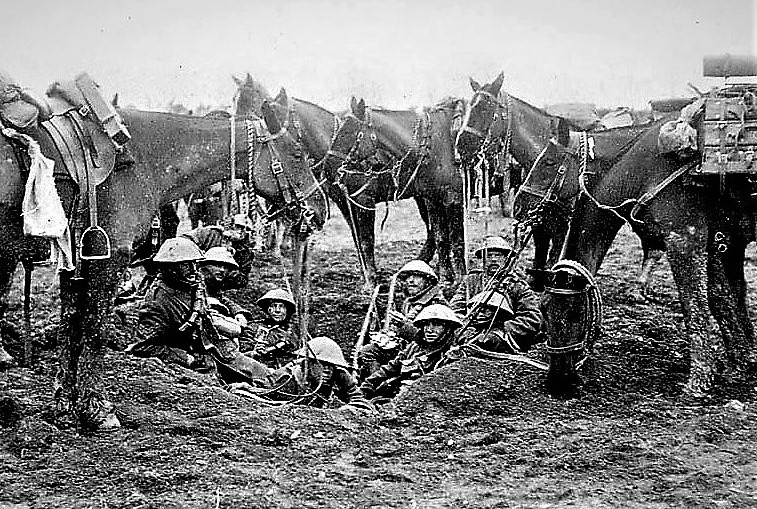 Waiting to move up.

Photograph taken on the Western Front during WW1 of British cavalrymen resting in a shell hole and waiting for the order to move up.  The legs of the horses are very muddy.

Photograph came from the National Library Of Scotland. 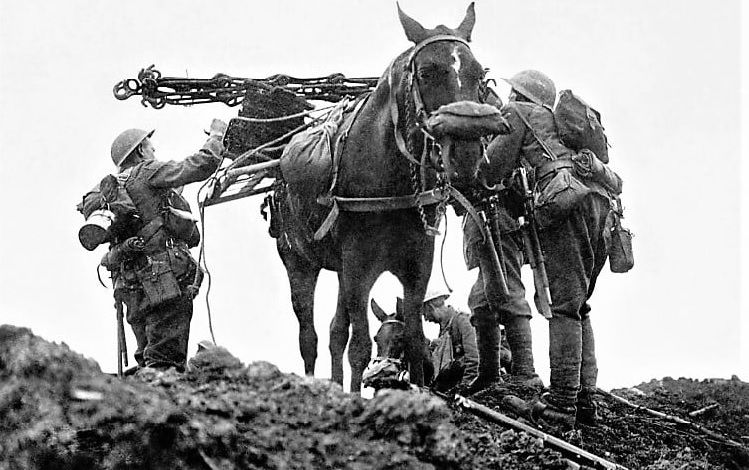 Photograph taken near Pilckem on the 31st of July 1917, during the Battle of Pilckem Ridge, of British troops loading a pack horse with wiring staples. Note the horse’s gas-mask.

When gas warfare began in 1915, nose plugs were improvised for the horses to allow them to breathe during attacks.  Later, several types of gas masks were developed by both the Central and Allied nations, although horses often confused them with feedbags and destroyed them. 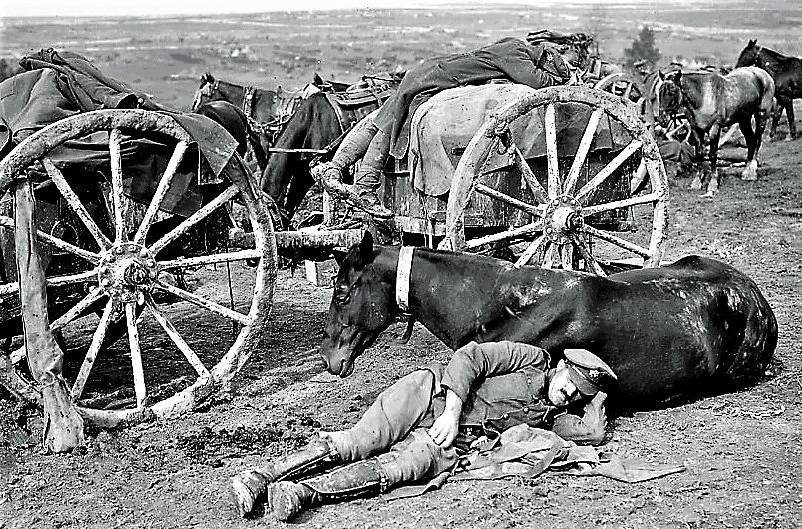 All really tired out.

The photograph, taken on the 7th of August, 1916, near Fricourt during the Battle of the Somme, is of troops and horses resting. Transport for the Devonshire Regiment.

Brigadier-General Frank Percy Crozier after the Battle of the Somme stated, “If the times are hard for human beings, on account of the mud and misery which they endure with astounding fortitude, the same may be said of the animals. My heart bleeds for the horses and mules.” 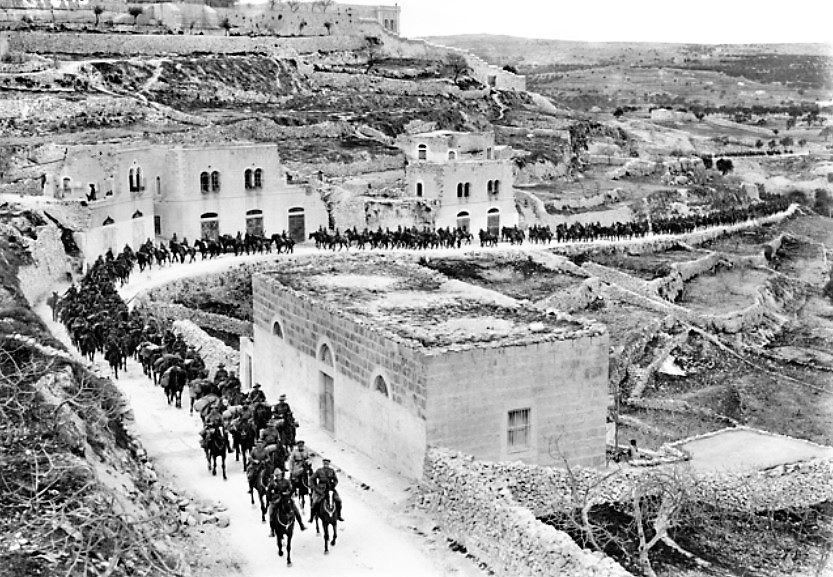 One of the greatest images.

A regiment of the Australian Light Horse on the march.  Leading the column is Brigadier General Charles Frederick Cox.

The 1st Australian Light Horse Brigade moving from Bethlehem towards Jerusalem on their way to the attack of Jericho, Palestine, in January 1918. 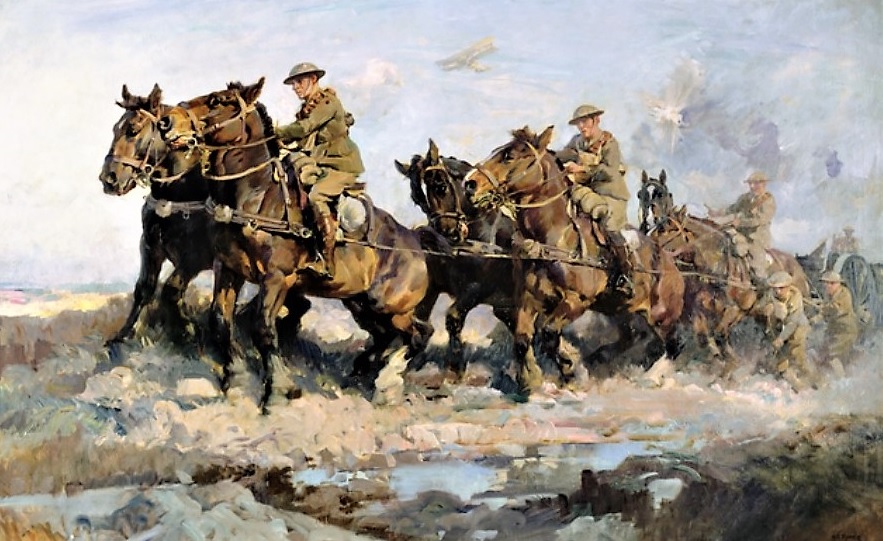 Commissioned to produce a large-scale battle scene, Septimus Power drew from his experience on the Western Front as an official war artist from September to December 1917 to create ‘Bringing up the guns’.

He has shown the 1st Australian Imperial Force 101st Australian Battery taking part in the Third Battle of Ypres in Passchendaele, Belgium in October 1917. 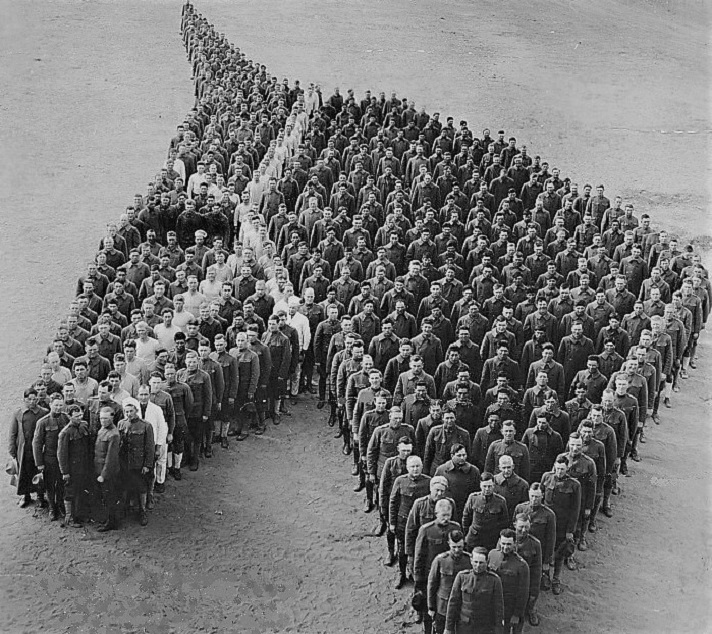 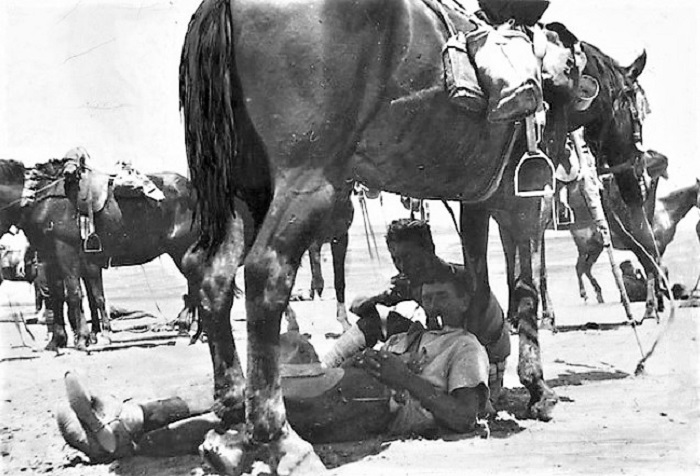 The photograph, taken in May 1916, is of two soldiers of the New Zealand Mounted Rifles resting in the shade of their horse in the Egyptian Desert.

The photograph came from the National Library Of New Zealand.  Reference number PA1-q-604-2. 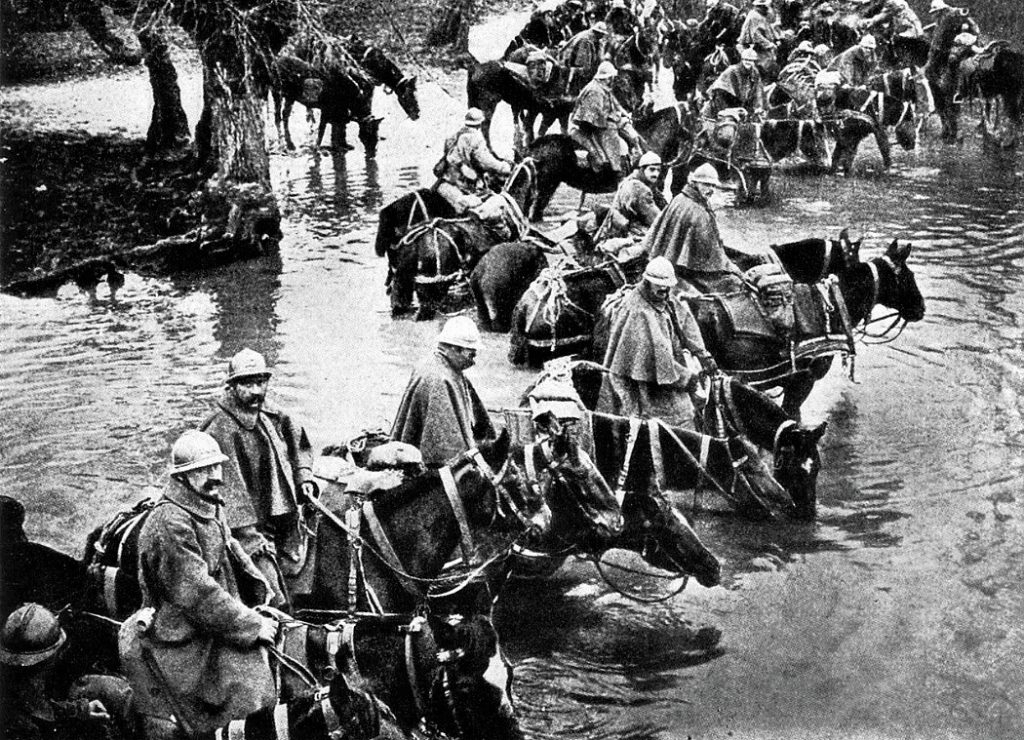 French horsemen crossing a river on their way to Verdun, during WW1. 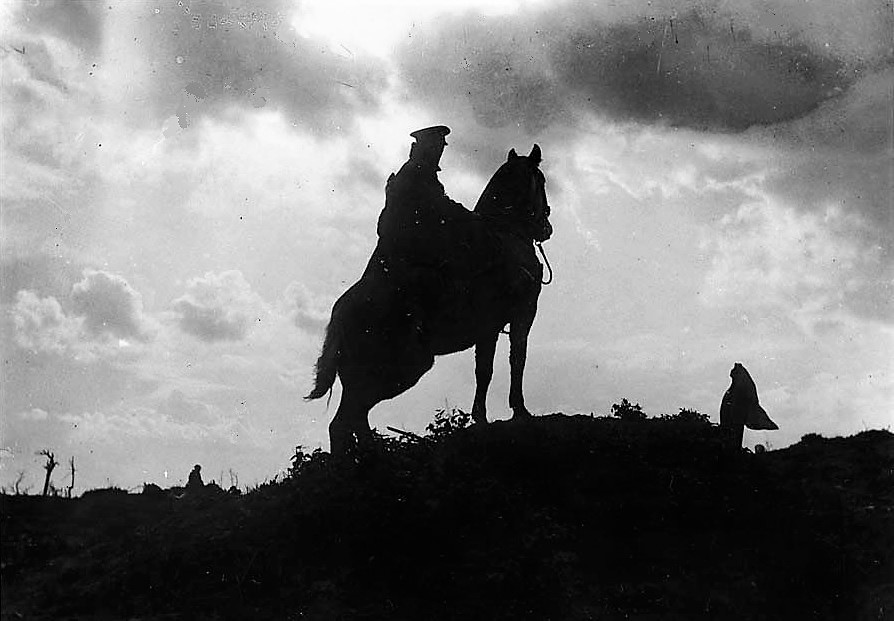 A cavalryman sitting on his horse on a ridge, during WW1.

This photograph is symbolic of the last days of the use of cavalry in European warfare.  Trench warfare and the broken, pitted ground, meant that the cavalry were vulnerable and of little use in this new type of fighting.

Photograph came from the National Library of Scotland. 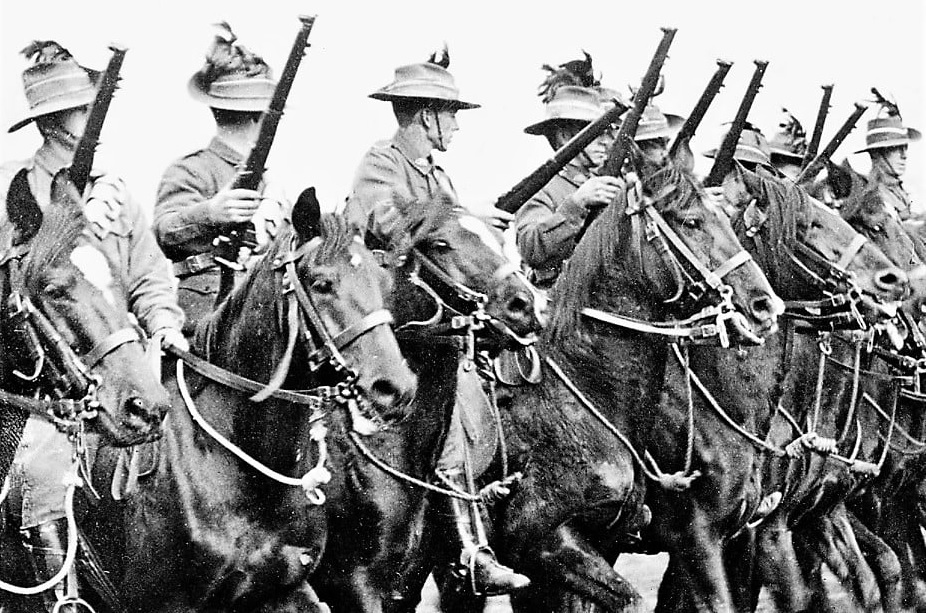 The Australian light horse regiments were devastated to learn their beloved horses would not be returning with them to Australia when WW1 ended.

Their horses, to them, was an animal that represented so many characteristics of our national identity at that time, like mateship, loyalty, strength and bravery.

The photograph came from the Australian War Memorial. Image file number AWM A03424. 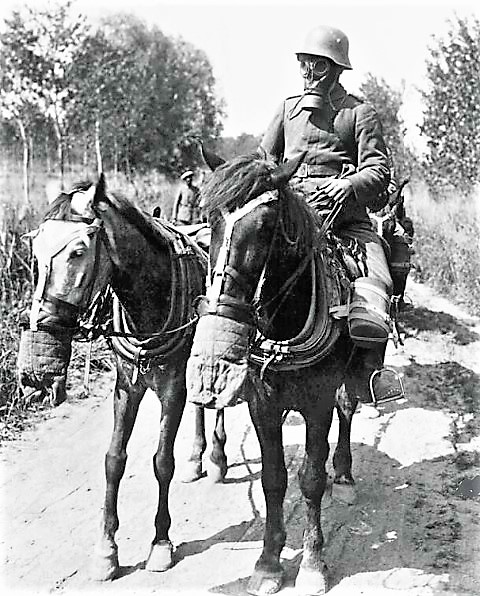