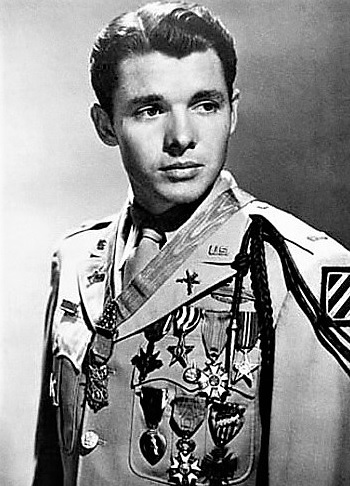 I watch a lot of old TV shows on YouTube.

Audie Murphy was the most decorated American combat soldier of WW2, receiving every military combat award for valour available from the United States Army, as well as French and Belgian awards for heroism.

At the age of 19, Audie Murphy received the Medal of Honor after single-handedly holding off an entire company of German soldiers for an hour at the Colmar Pocket in France in January 1945, then leading a successful counter attack while wounded and out of ammunition.

After the war, Audie Murphy had a 21 year acting career. He played himself in the 1955 autobiographical ‘To Hell and Back’ based on his 1949 memoirs of the same name, but most of his films were westerns.

The movie ‘To Hell and Back’ was a critical and box office success. In fact, it was Universal’s biggest hit until ‘Jaws’.

Suffering from insomnia and recurring nightmares, from what would today be described as post traumatic stress disorder (PTSD), he once said that he could sleep only with a loaded pistol under his pillow.

In the last few years of his life he was plagued by money problems, but refused offers to appear in alcohol and cigarette commercials because he did not want to set a bad example.

Audie Murphy died in a plane crash in Virginia in 1971 shortly before his 46th birthday, and was interred with full military honours at Arlington National Cemetery.

Information and photograph came from Wikipedia.

The research for the article ‘American War Hero WW2’, was undertaken by Peter Barnes.  This story was previously posted on his Facebook Page.