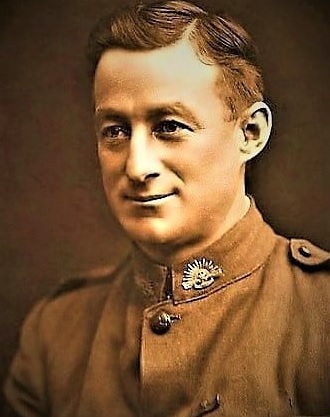 In finding some old newspaper articles about him, I was shocked to read what happened to him. Very sad indeed.

Here are some of those articles…

This article comes from The Tumut and Adelong Times (NSW) – Dated Tuesday the 29th of October 1929.

From national hero, with his name a synonym of gallantry, to oblivion, without home or job, in a country town, is the pathetic progress of ex-Private John Ryan, V.C. Winner of highest award for gallantry that his country could bestow, he now tramps from town to town in an unavailing search for work.

Typically, he attributes to ‘luck’ the affair that brought him his decoration. The official book of V.C.’s is more communicative. ”When the Australians were crashing through the Hindenburg line, Sept., 1918,” says the record, ”the 55th Battalion, to which Ryan belonged, was, together with other units, well in the attack. Ryan was one of the first to rush into a German trench, which was taken, but he showed, perhaps, higher qualities later when he led three men against some bombers who were making his position untenable. He put these men out of action and was then severely wounded.”

A native of Tumut, Ryan sacrificed his job for the country that now denies him work. He is now in Dubbo, where he has sought vainly for work during the past few weeks.

The article below comes from the Northern Star (Lismore NSW) – Dated Thursday the 5th of June 1941.

V.C. WHO DIED IN WANT

MELBOURNE, Wednesday – Tragedy lies behind the death in hospital of Pte. Edward John Ryan, V.C. hero of the last war, who had battled for years against adversity. He died at the age of 54 years, in want.

For months he had tramped the streets looking for work. On the day he was to have started work he had to be taken to hospital.

Ryan received his V.C. for driving back the enemy in the Hindenburg line with bombs and bayonet after all his companions around him had fallen.

I have also read he was 51 years old when he died (9 February 1890 – 3 June 1941), He died of pneumonia in the Royal Melbourne Hospital on the 3rd of June 1941 and was buried with military honours in the Catholic section of Springvale cemetery where eight V.C. recipients formed a guard of honour.

On his grave we see ‘BRAVEST OF THE BRAVE. 1717. 55TH BALLALION A I.F. ERECTED BY THE STATE GOVERNMENT OF VICTORIA AS A TRIBUTE TO THE MEMORY OF A GALLANT SOLDIER’.