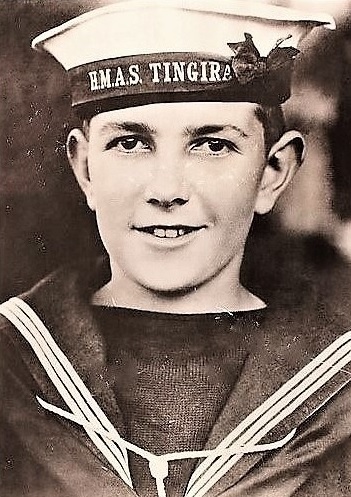 In 1911 the ship ‘Sobraon’ was purchased by the Commonwealth Government for £15,000 and fitted out as a boys training ship for the fledgling Royal Australian Navy (RAN). The ship was commissioned as HMAS ‘Tingira’ (an aboriginal word for “open sea”) on the 25th of April 1912, and moored in Rose Bay, Sydney. Up to 250 boys between the ages of 14 1/2 and 16 could be trained at any time.

‘Tingira’ trainees were well regarded in the early years of the RAN and many went on to serve in war.

Some ex-HMAS ‘Tingira’ boys were involved in Australia’s first naval battle in late 1914 in WW1, when HMAS ‘Sydney’ sank the German raider ‘Emden’ off Cocos Island.

Enlistment of boys was normal practice for the Navy and several died on service during WW1.

The Australian War Memorial’s Roll of Honour for WW1 has five boy sailors names who died while serving on HMAS ‘Tingira’.

‘Tingira’ was decommissioned in 1927 and eventually scrapped.

Teenage trainees at the RAN’s Junior Recruit Training Establishment (which operated at Fremantle naval base HMAS ‘Leeuwin’ from 1960 to 1984) wore shoulder flashes bearing the name ‘Tingira’ as a historical link with the training ship.

Information came from various sources including Wikipedia, the Australian War Memorial, and the Royal Australian Navy. The photograph of the boy sailor is unnamed

Peter Barnes undertook the research for the article ‘Australian Boy Sailors’. The story was first posted on his Facebook Page.