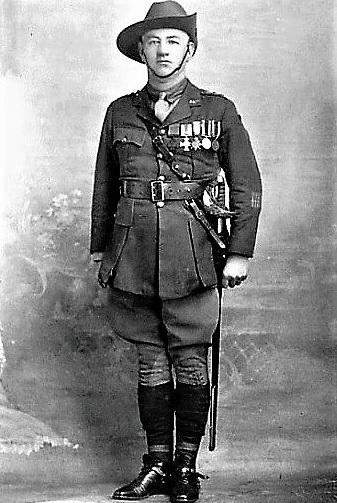 If you are looking for stories of great Australian heroes, you cannot go past one of Australia’s greatest combat soldiers, Captain Albert Jacka VC MC & Bar.

It is thought the photograph in this article was taken in the 1920s, or closer to when he passed away on the 17th of January 1932.  Albert Jacka never fully recovered from the multiple wounds he sustained during his war service and died at the age of 39.

During his funeral he was described as ‘Australia’s greatest front-line soldier’.  A final testament to the character of Albert Jacka was the eight Victoria Cross recipients who acted as pallbearers at his funeral.

Albert Jacka was the first Australian to be decorated with the VC during the WW1, receiving the medal for his actions during the Gallipoli Campaign.  He later served on the Western Front and was twice further decorated for his bravery.

The choosing of Simpson and his donkey is an interesting subject for anyone interested in marketing.  It took me until I was much older to understand why the caring and selfless Simpson and his donkey was seen as a much better example to present to school children than someone like Albert Jacka who won a VC at Gallipoli and went onto being awarded the Military Cross and Bar on the Western Front.  Many believe he should have received a Bar to his Victoria Cross.

People like Albert Jacka, courageous soldiers in battle, were sidelined from becoming the epitome of the ANZAC spirit in Australia because they fought and killed. Simpson killed no-one and saved lives (like many other stretcher-bearers at that time), and therefore presented an ideal image, especially to school children.

Albert Jacka was a courageous fighter in a total war, where nothing was held back, and so one of our greatest war heroes never received the great position of being one of the main stories to become the image of ANZAC in Australia in later years.

Both Simpson and Albert Jacka were brave and courageous men. I will always have a soft spot for Simpson and his donkey but, Albert Jacka, in later years, should have been presented nationally for what he was… a great warrior and fearless soldier in the ANZAC spirit.

The research for the article ‘Australian WW1 Hero’, was undertaken by Peter Barnes.  The story was originally posted on his Facebook Page.