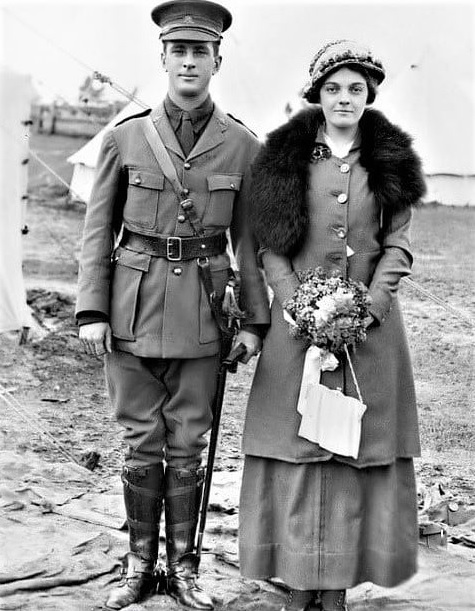 The groom is Second Lieutenant John Frederick Bagot who embarked on the 12th of May 1915 and served with the 13th Light Horse Regiment.

His bride is Eileen Dubois Ive of Woodville, South Australia. She wears a travelling costume, carries a bouquet of violets and fairy roses as well as a silver bag, a gift of the officers of the Light Horse. They were married on the 13th of March 1915.

John Bagot trained in South Australia for seven months with the 9th Light Horse before transferring to the Light Horse Depot at Broadmeadows. He passed his examination for commissioning as a 2nd lieutenant and was appointed to this rank on the 24th of March 1915.

In November 1917 he was promoted in the field to the rank of Captain. He returned to Australia in February 1919.

He served at Gallipoli and the Western Front and was Mentioned in Despatches ‘for gallant conduct and devotion to duty in the field’.

John Bagot passed away on the 30th of March 1961 at the Repatriation Hospital, Springbank, South Australia, aged 75, and is buried in North Road Cemetery, Nailsworth, South Australia.

Most of the information and photograph came from the Australian War Memorial. Image file number AWM DAX0549.

The research for the article ‘WW1 Wedding’, was by Peter Barnes.  The story was originally posted on his Facebook Page.