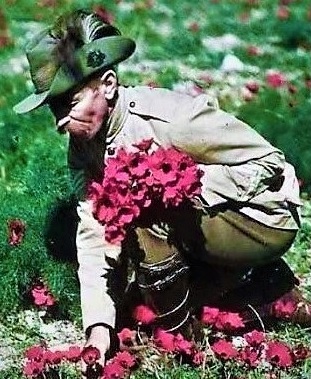 One of my favourite  photographs.

In 2007, this photograph taken in 1918, captioned ‘An Australian Light Horseman collecting anemones near Belah in Palestine’, was identified as being Trooper George ‘Pop’ Redding, 8th Light Horse Regiment.

Trooper Redding enlisted from Benalla, Victoria, on the 28th of August 1915, stating his age to be 44.  He was in fact 57, making him 60 years old at the time of this photograph and one of the oldest enlisted men in the Australian Imperial Force (AIF).

Trooper Redding’s service record, has him serving for 23 years in the 16th Light Horse, Citizen Military Forces, prior to enlisting in WW1.   The 16th Australian Light Horse Regiment served in the South African (Boer) War.

Interestingly, ‘The King’s Colours’ are in the St Augustine`s Anglican Church, Victor Harbor, South Australia, and were ‘Presented by His Most Gracious Majesty the King Emperor to the 16th Australian Light Horse Regiment in recognition of services rendered to the Empire in South Africa’.   It would be King Edward VII, as ‘The King’s Colours’ were presented in 1904.

The incredible iconic photograph of Trooper Redding, was taken by Captain Frank Hurley, the well-known Australian war photographer in WW1.

I found a death notice in ‘The Age’ newspaper (Melbourne) dated Saturday the 10th of August, 1935.

You will see (Dad) in his death notice, and this could explain it, as his only child died at an early age.  After the war, Trooper Redding was an officer of the Closer Settlement Board in Beulah for over 14 years, and became respected and loved by the soldier settlers of the area, to whom he was a true friend.  The younger returned soldiers affectionately called him ‘Dad’.

The following came from a newspaper article, dated the 8th of August, 1935, in the Melbourne ‘Sun’.

BEULAH.  Wednesday, – One of oldest survivors of the great war, Mr George Redding of Beulah, aged 78, collapsed last night at Beulah Roman Catholic ball after having taken part in an old time dance and died within a few minutes.

Mr. Redding, who was also a Boer war veteran, served with the 8th Regiment of Light Horse in Egypt and Palestine, and enlisted at the age of 60.

The old newspaper article got Trooper Redding’s age wrong, having him enlisting at the age of 60.   He enlisted in 1915 and passed away in 1935, aged 78, so he would have been around 57 years old when he enlisted.

Lest We Forget.
Information and the photograph above, came from the Australian War Memorial.  Image file number AWM P03631.046. 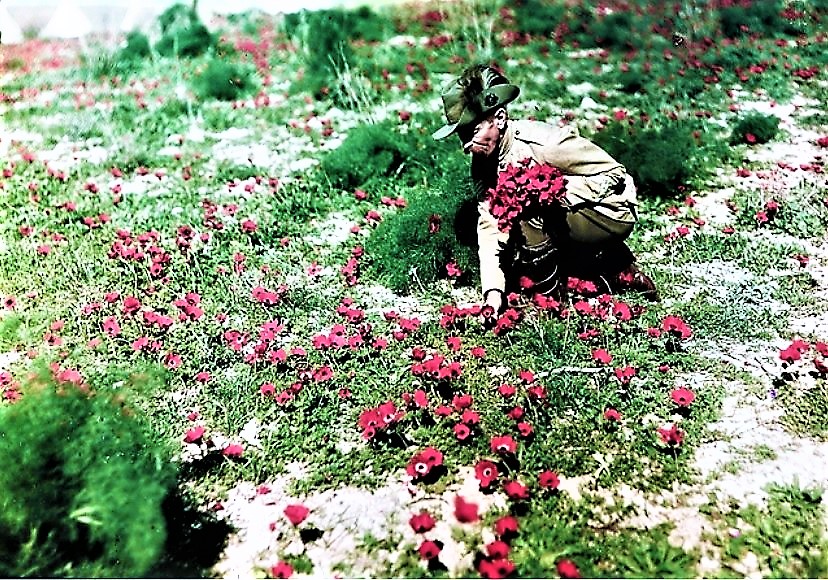