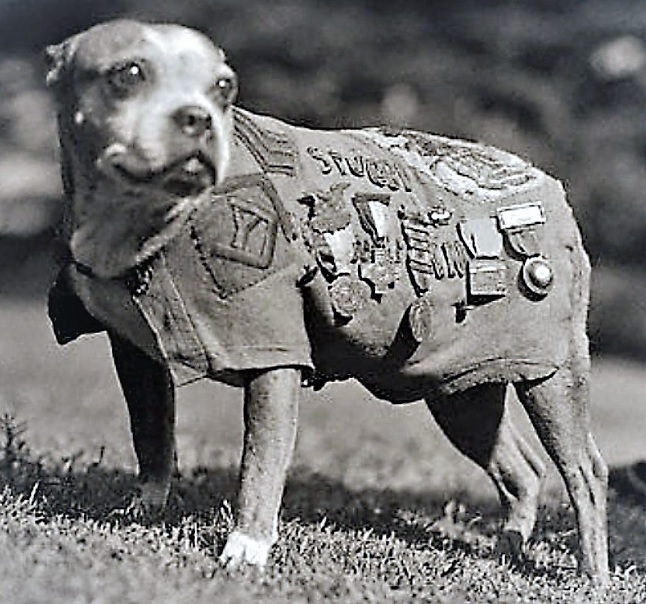 Sergeant Stubby (1916 or 1917 – 16th of March 1926) was the official mascot of the 102nd Infantry Regiment (United States) and was assigned to the 26th Division in WW1.  He participated in seventeen battles on the Western Front.

He saved his regiment from surprise mustard gas attacks, found and comforted the wounded, and once caught a German soldier by the seat of his pants, holding him there until American soldiers found him.

He was wounded a number of times and gassed.

Stubby has been called the most decorated war dog of WW1, and the only dog to be nominated for rank and then promoted to sergeant through combat.

After returning home, Stubby became a celebrity and marched in, and normally led, many parades across the country.  He met Presidents Woodrow Wilson, Calvin Coolidge, and Warren G. Harding.

Photograph and information came from Wikipedia. 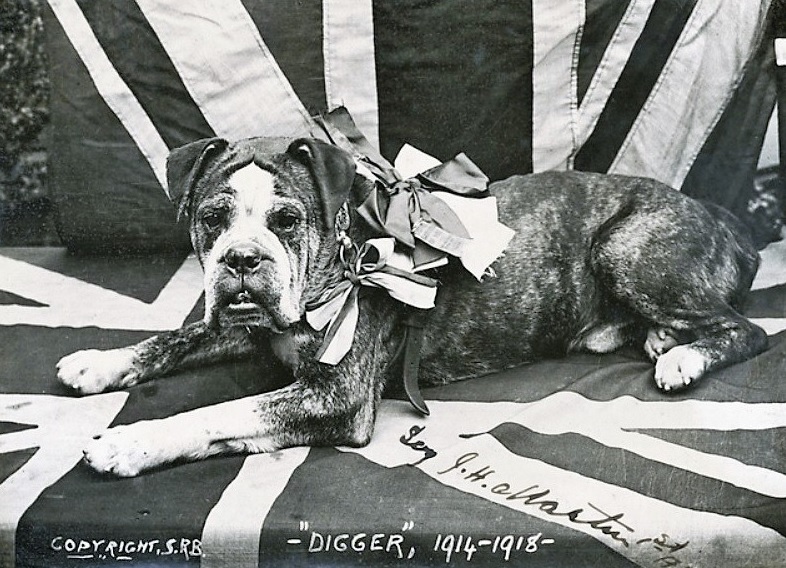 The photograph is of Digger, a dark brown and white bulldog.

Digger seems to have been a stray that attached himself to soldiers on their way down to the troopships at Melbourne.  The 1st Division immediately adopted him as a mascot and Digger sailed with them to war on the 20th of October 1914.

It is understood that Digger soon devoted himself to Private James Harold Martin who was serving with the 1st Division Signal Company.  Martin, an electrician from Hindmarsh in South Australia enlisted on the 18th of September 1914 at the age of 22.

He served on Gallipoli, and transferred to the 2nd Division Signal Company in July 1915.  He remained with the company, attached to the Engineers, during his service on the Western Front in France and Belgium.  Martin returned to Australia on the 12th of May 1918 and was discharged medically unfit.  Digger was able to accompany him home as strict quarantine regulations relating to the arrival of dogs in Australia from overseas did not come into force until June 1918.

Newspaper articles at the time refer to Digger’s remarkable service with the 1st Division.  They describe how Digger ‘went over the top’ 16 times and had been through some of the worst battles on Gallipoli and the Western Front.  He had been wounded and gassed at Pozieres in 1916, shot through the jaw, losing three teeth, was blinded in the right eye and deaf in the left ear.

Digger died, as an old dog, on Empire Day (24 May, probably 1919) when he was frightened by the celebratory fireworks.  Thinking he was under fire again he attempted to jump the fence but failed and fell back with a burst blood vessel.  Digger managed to crawl back into the house and died under Martin’s bed. 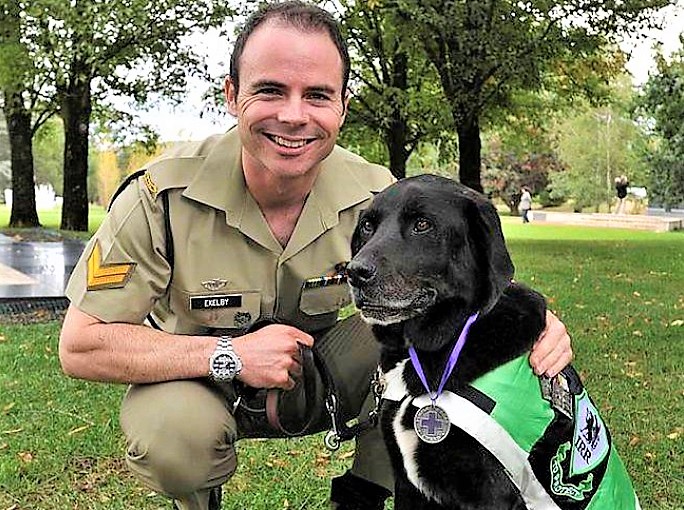 A dog park in Brisbane is named in her honour and a sculpture of her guards the grounds.

Sarbi was an Australian special forces explosives detection dog that spent almost 14 months missing in action in Afghanistan having disappeared during an ambush on the 2nd of September 2008.

Sarbi was later rediscovered by an American soldier, and was reunited with Australian forces pending repatriation to Australia.

Sarbi’s handler, Warrant Officer David Simpson, who was one of nine Australian soldiers injured in the ambush, was said to have never given up hope of finding her, and was profoundly relieved at her recovery.

Information came from Wikipedia.  Photograph came from Australian Army.  The photograph is of Explosive Detection Dog Handler Corporal Adam Exelby with Sarbi, having recieved the RSPCA Purple Cross.  Corporal Exelby was a former handler of Sarbi. 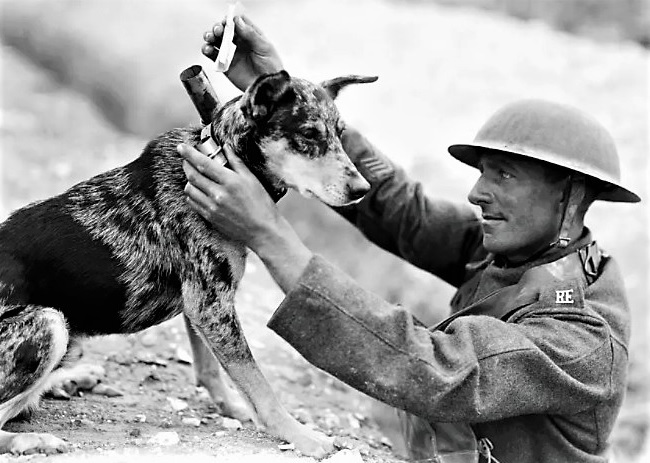 British soldier with a messenger dog during WW1.

Nearly 20,000 dogs served with the British Army on the frontline during WW1. 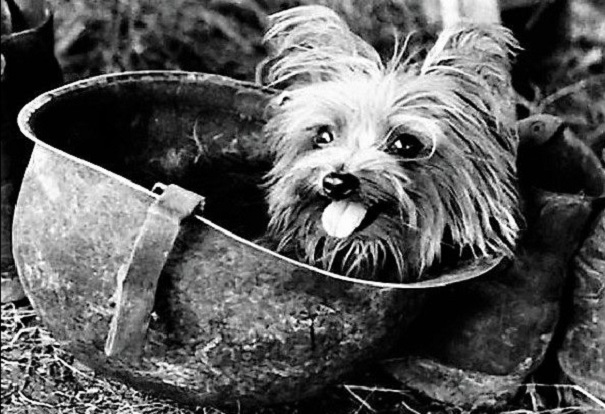 In February 1944, Smoky was found by an American soldier in an abandoned foxhole in the New Guinea jungle and was later sold to Corporal William Wynne of Cleveland, Ohio.

Smoky back-packed through the war and accompanied Corporal Wynne on combat flights in the Pacific.  She faced adverse circumstances, living in the New Guinea jungle and Rock Islands.

As described by Corporal Wynne… “Smoky served in the South Pacific with the 5th Air Force, 26th Photo Recon Squadron and flew 12 air/sea rescue and photo reconnaissance missions.”  On those flights, Smoky spent long hours dangling in a soldier’s pack near machine guns used to ward off enemy fighters.

Smoky was credited with twelve combat missions and awarded eight battle stars.  She survived 150 air raids on New Guinea and made it through a typhoon at Okinawa.

Corporal Wynne credited Smoky with saving his life by warning him of incoming shells on an LST (transport ship), calling her an “angel from a foxhole.”  As the ship deck was booming and vibrating from anti-aircraft gunnery, Smoky guided Corporal Wynne to duck the fire that hit eight men standing next to them.

Smoky learned numerous tricks, which she performed for the entertainment of troops with Special Services and in hospitals from Australia to Korea.  After the war Smoky became a national sensation.  Over the next 10 years, Smoky and Corporal Wynne travelled to Hollywood and all over the world to perform demonstrations of her remarkable skills.

Smoky died at the age of 14.  Corporal Wynne and his family buried Smoky in a WW2 .30 caliber ammo box in the Cleveland Metroparks, Rocky River Reservation in Lakewood, Ohio.

Smoky had a blanket made for her during WW2 by Australian ladies, and it helped protect her from the cold on long flights in aircraft while on Air/Sea rescue missions.  Smoky was awarded the RSPCA Australia Purple Cross on the 17th of November 2015.

There are monuments erected in memory of Smoky in America and Australia.  There is also a couple of books about Smoky.  She did so much in her life.

Some information and photograph came from Wikipedia. 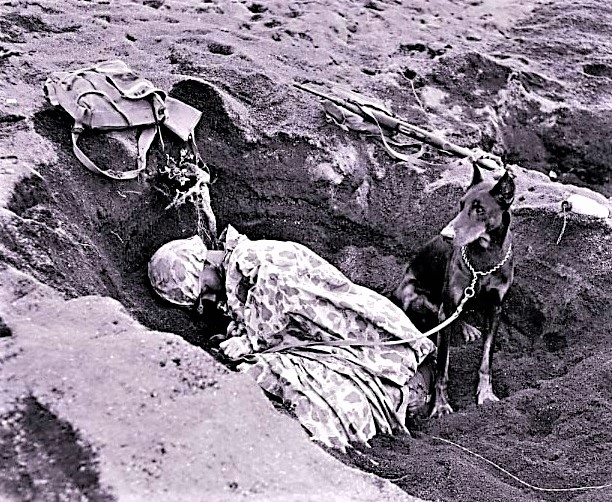 War dogs sometimes were used to flush out hidden Japanese, as at Guam and at Mount Suribachi on Iwo Jima, but took heavy casualties doing so.

The National War Dog Cemetery is a memorial to war dogs located at Naval Base Guam.  The cemetery honors the dogs – mostly Doberman Pinschers – that were killed in service with the United States Marine Corps during the Second Battle of Guam in 1944.

The island of Guam, an American territory since 1898, was captured by Japanese forces on December 10, 1941, in the first days after the U.S. entered WW2.   Guam was held by the Japanese for two and a half years, until U.S. Marines landed to retake the island in July 1944.  Along with them were the 2nd and 3rd War Dog Platoons, used as sentries and scouts in over 450 patrols.  They explored the island’s cave system, detected land mines and booby traps, and guarded sleeping Marines.

In the most famous incident, a Doberman named Kurt, saved the lives of 250 Marines when he warned them of a massive Japanese force ahead.  Kurt was badly injured in the ensuing mortar attack, along with his handler, PFC Allen Jacobson, who is said to have refused treatment until Kurt had been evacuated.  Kurt became the first of the war dogs to be killed in action on Guam.

Of the 60 Marine war dogs that landed on Guam, 25 died there and 20 more were wounded.

This photograph came from the Records of the U.S. Marine Corps.  Most of the information came from Wikipedia. 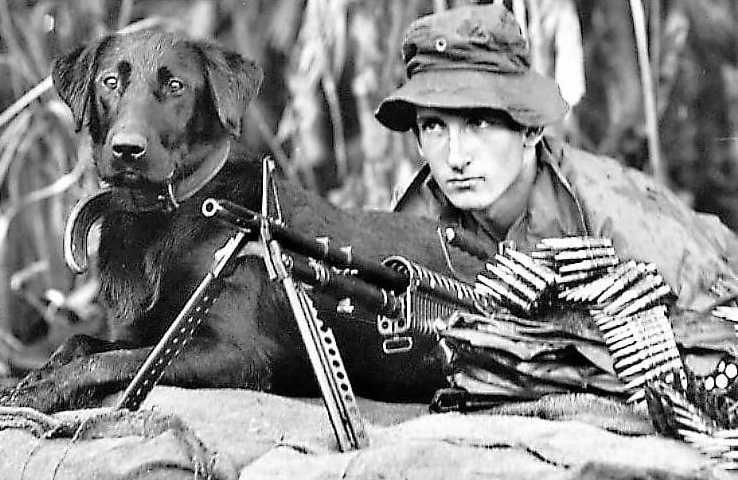 A digger with his dog watch for the Viet Cong during Operation Paddington, in the Vietnam War.

The photograph taken in July 1967, is of Tiber, a Labrador tracker dog with the 7th Battalion, The Royal Australian Regiment (7RAR), on piquet duty with his personal handler, Lance Corporal Norman Leslie (Norm) Cameron of Kingston, South Australia.

Tiber arrived in Vietnam on the 12th of May 1967.  He was one year into his tour of duty with 1RAR when he went missing during the attack at Fire Support Base Coral on the 15th-16th of May 1968.

Tiber went into retirement in June 1970 and transferred to a new home with staff at the Australian Embassy in Saigon.

Eleven tracker dogs went to Vietnam between April 1967 and September 1971, but they could not return home when their tour of duty ended.