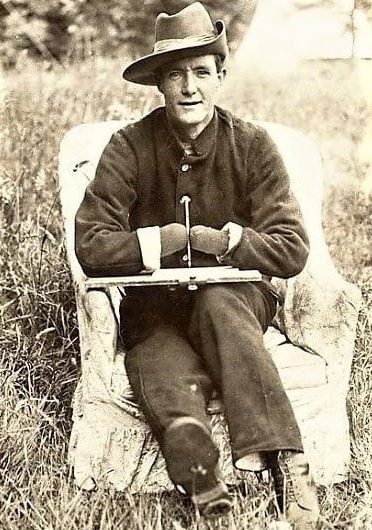 One of the most heart-wrenching stories of a wounded Australian soldier during WW1, who lost both hands.

He is writing a letter by using the stumps of his wrists to hold the pen, most likely at No.1 Australian Auxiliary Hospital, Harefield, England.  Most likely he was writing home.

The photograph is of Private John Francis Naughton (6 October 1885 – 18 November 1916). A high school history teacher helped identify Private Naughton as the soldier in the photograph over a hundred years after the photograph was taken.

Private Naughton of Charters Towers, Queensland, was a baker prior to enlistment. He embarked with the 3rd Battalion in September 1914 and served on Gallipoli, where he was wounded on the 14th of August 1915, when a bomb exploded in his hands, also injuring his right thigh and knee. He was evacuated to a hospital ship via Mudros, and from there to England, spending time at King George Hospital, Harefield, Roehampton Hospital, St Mary’s Convalescent Hospital and ultimately to Fulham Hospital.

During his stay in hospital Private Naughton fell in love and was going to marry his sweetheart, a nurse who looked after him. He was waiting for his hands to be fitted. His incredible toughness and resilience got him walking a little without crutches, even though he had a serious thigh injury.

Private Naughton died from kidney issues due to his wounds. Initially, he was buried in an open grave, because at the time they couldn’t keep pace with the number of men dying in the hospitals. They were still burying soldiers en masse up until 1917. Individual graves were for officers and nurses, who were honorary officers. The other soldiers were often buried in pits. Private Naughton’s body was left exposed at Kensal Green Cemetery in London for weeks. The grave was only covered after protests from Australian expatriates.

Private Naughton’s body was exhumed in 1921 and placed in a separate plot for Australian soldiers.

Australian anger over the undignified treatment that Private Naughton received in death led to better burial practices for the fallen. So in death, Private Naughton played an important role in shaping how Australia’s war dead were treated.