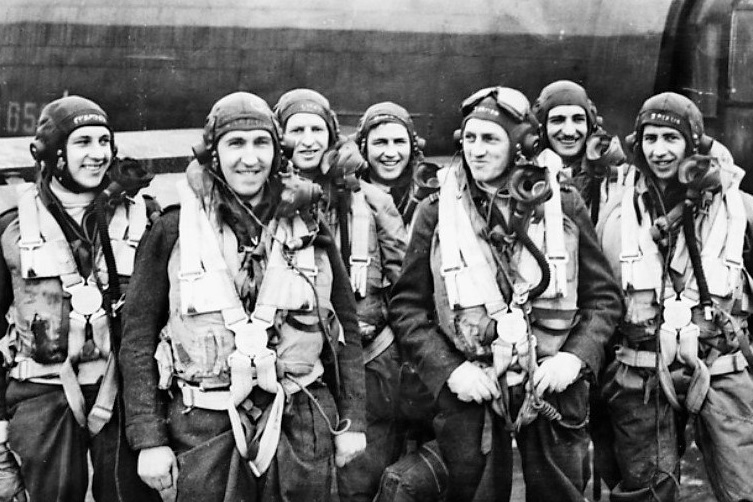 The photograph is of a RAAF crew of a Lancaster Bomber from No. 460 Squadron RAAF at RAF Station Binbrook.  Everyone in the photograph perished, except one, on operations over Germany on the 28th of April 1944.

Identified personnel from left to right are:

Flying Officer Marmion Wilfred Carroll, DFC, Navigator.  He was from Ferntree Gully, Victoria, and enlisted in the RAAF on the 19th of July 1940.

At the age of 32, he was one of the oldest crew members.

Flying Officer Carroll was awarded the Distinguished Flying Cross (DFC), on the 13th of July 1945.  He is buried at the Durnbach War Cemetery, Germany.

Pilot Officer Thomas Joseph Lynch, Rear Gunner.  He was from Toowoomba, QLD.  Pilot Officer Lynch was presumed to have perished with the rest of the crew, but was eventually discovered in a German prisoner of war camp.  He was badly injured and his right leg was amputated.

After the war, Thomas Lynch moved to Sydney, New South Wales, where he worked as a clerk.  He married Shirley Mildred Jordan in November 1951, and they settled and raised their family in Cronulla, New South Wales.

Thomas Lynch died on the 14th of November 1994, and was buried at Woronora Memorial Park, Sutherland, New South Wales.

Flying Officer Hector Ronald Harrison, Wireless Operator.  He was from Lismore, NSW, and was a butcher for five years in his hometown of Lismore.

Flying Officer Harrison enlisted in the RAAF, aged 20.   He is buried at the Durnbach War Cemetery, Germany.

Squadron Leader Jarman was awarded the Distinguished Flying Cross (DFC), for his coolness, courage and determination in a raid on Cologne, Germany.

During this raid, his aircraft was hit by flak and attacked by an enemy fighter.  However, he was able to land his damaged plane in England, despite one member of his crew being killed and two others wounded.

Squadron Leader Jarman commenced his second operational tour with 460 Squadron in March 1944.  He is buried at Durnbach War Cemetery, Germany.

Flying Officer Ronald Leslie Neal, Mid-Upper Gunner.  He was from Grenfell, NSW, and worked as an engine driver before enlisting on the 27th of April 1941.

At the age of nearly 31, he was one of the oldest crew members.  Flying Officer Neal is buried at Durnbach War Cemetery, Germany.

Flying Officer Jackson was awarded the Distinguished Flying Cross (DFC), on the 20th of April 1943, for considerable skill and ability as an air bomber on sorties.  He is buried at Durnbach War Cemetery, Germany.

They received more decorations per capita than any other element of the Allied military forces.

RAAF (Royal Australian Air Force).  Most of the information and photograph above came from the Australian War Memorial.  Image file number AWM 081318.

In her capacity as an official war artist, Stella Bowen did a painting (further below) of the bomber air crew.

It is an iconic painting.

On the 27th of April 1944, she began a series of pencil sketches of the bomber crew.

Preoccupied with their flight preparations, the men expressed no particular interest in her attempt to draw them, but their bravery and youth captivated the artist.

That night their operation took them over Friedrichshafen, a vital industrial centre on the shores of Lake Constance.

By morning, Stella Bowen’s subjects were reported missing.  The artist had only made preliminary sketches of the crew, but she returned to her London studio to complete the painting, working from pencil sketches, and official photographs.

She later wrote to her brother: “It was horrible having to finish the picture after the men were lost. Like painting ghosts.” 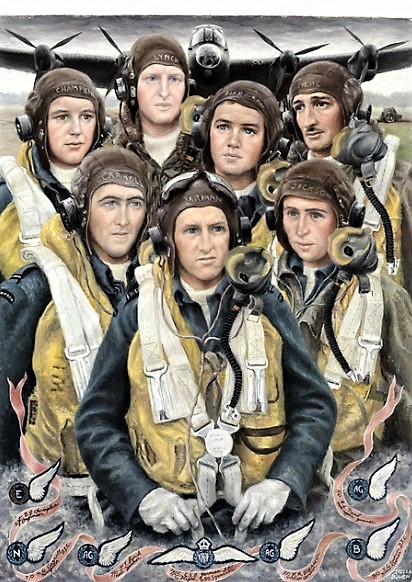