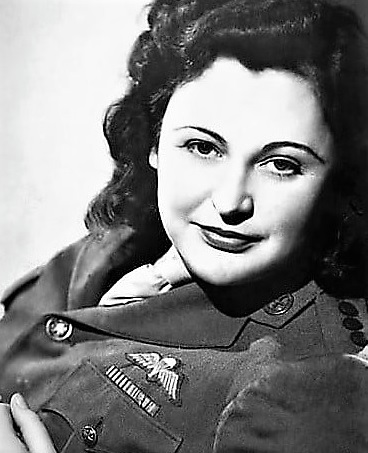 Nancy Wake, a prominent figure in the French Resistance during WW2, was born in Wellington, New Zealand, on the 30th of August 1912. Her family moved to Sydney, where she grew up, when she was just 20 months old. She ran away from home at the age of 16 and found work as a nurse, but a windfall enabled her to leave Australia for Europe in 1932. She settled in Paris, working for the Hearst group of newspapers as a journalist.

As the 1930s progressed, the rise of German Fascism formed the basis of many of Nancy Wake’s stories. In 1935 she visited Vienna and Berlin where the overt and violent anti-Semitism formed in her a desire to oppose Nazism. In November 1939 she married Henri Fiocca, a wealthy industrialist, in Marseilles. Six months later Germany invaded France. Nancy Wake and Fiocca joined the fledgling Resistance after France’s surrender in 1940.

Her growing involvement in the Resistance saw Nancy Wake and her husband assisting in the escape of Allied servicemen and Jewish refugees from France into neutral Spain. Fearful of being captured she too fled Marseilles and, after several thwarted attempts and a brief period in prison, Nancy Wake escaped across the Pyrenees. In June 1943 she reached England where she began working in the French Section of the Special Operations Executive (SOE).

After a period of training, Nancy Wake returned to France in April 1944 to help organise the Resistance before D-Day. Working in the Auvergne region, she was engaged in organising parachute drops of arms and equipment, and after D-Day, was involved in combat with bodies of German troops sent to destroy the Maquis.

In reference to Nancy Wake’s ability to elude capture, the Gestapo called her the ‘White Mouse’.

Upon liberation, she learned that her husband, Henri, had been killed by the Gestapo in August 1943. In September 1944 she left the Resistance and went to SOE Headquarters in Paris, and then to London in mid-October.

After the war she was decorated by Britain, France and the United States but, being unable to adapt to life in post-war Europe, she returned to Australia in January 1949 aged 37. Shortly afterwards she ran for the Liberal Party against Labor’s ‘Doc’ Evatt and, having been narrowly defeated, made a second attempt in 1951, again unsuccessfully.

Nancy Wake returned to England, and in 1957, married John Forward, an RAF officer. The couple returned to Australia in 1959. A third attempt to enter politics also failed and she and her husband ultimately retired to Port Macquarie where they lived until his death in 1997. In December 2001 she left Australia for England where she lived out her remaining years.