The Burial Of The Unknown Warrior 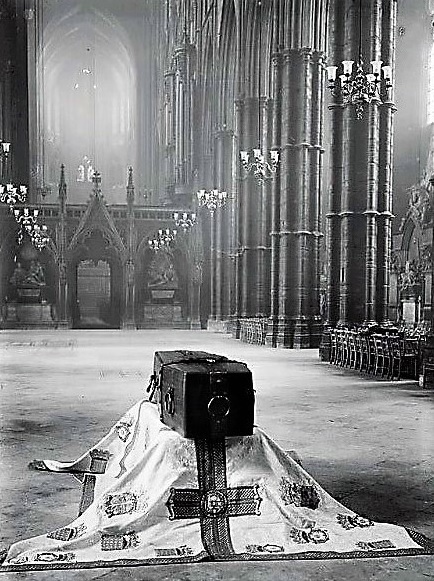 The coffin of the Unknown Warrior in state in the Abbey, London, in 1920.

He was buried in Westminster Abbey, London on the 11th of November 1920, simultaneously with a similar interment of a French unknown soldier at the Arc de Triomphe in France.

The guests of honour were a group of about one hundred women. They had been chosen because they had each lost their husband and all their sons in the war – “Every woman so bereft who applied for a place got it”.

The guard of honour were 100 holders of the Victoria Cross from all three services.

The coffin was interred in soil brought from each of the main battlefields, and covered with a silk pall.

On the 17th of October 1921, the unknown warrior was given the United States’ highest award for valour, the Medal of Honor.  It hangs on a pillar close to the tomb.  On the 11th of November 1921, the American Unknown Soldier was reciprocally awarded the Victoria Cross.

I found it very moving that women who had lost their husband and all their sons were guests of honour – what great loss was present that day.

Information and photograph came from Wikipedia