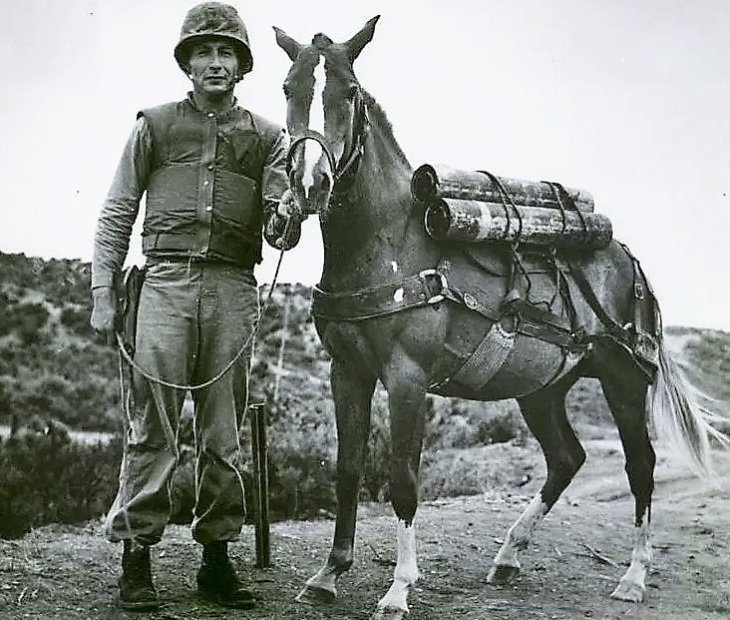 An American Marine gun crew during the Korean War bought a Mongolian bred mare with their own money and trained her to carry shells for the recoilless rifle they called ‘Reckless’.

They also named the mare ‘Reckless’, and she became their mascot and an indispensable member of their gun crew. Reckless often, under heavy fire, made countless trips delivering ammunition from the supply point to the gun. She would often do this alone.

I have also read that Reckless completed 51 solo trips in a single day during the Battle for Outpost Vegas in 1953. The battle raged for 5 days and it is estimated that there were over 1,000 American casualties and twice that number of Chinese during the battle. It is regarded as one of the bloodiest battles in Marine Corps history.

Reckless was also used to evacuate the wounded and was injured twice.

In recognition of her incredible war service, she was presented with a special citation for bravery by the Marines and promoted to Sergeant.

The Marines personally payed for her travel to the United States, where she enjoyed a well-earned retirement pastured at Camp Pendleton.

Reckless was once named as one of the 100 all time American heroes by Life Magazine.

Reckless died in 1968. I believe there is a book about Sergeant Reckless.

Photograph of Reckless with her main caretaker, US Marine Sergeant Joseph Latham, came from the United States Marine Corps. The photograph is in the public domain.