His Australian war time paintings came out of a life long interest in Australia’s war history and the incredible sacrifice of many Australians who fought and died for our great country.

There are still a number of paintings left to buy below from his series of Australians in wartime.

Peter also does commissioned paintings, focusing on portraits and landscapes. You can phone him on 0418 82 7756 to discuss any painting you would like done.

Peter is the author of the Australian war heroes song, titled ‘Can You Hear Australia’s Heroes Marching?’ 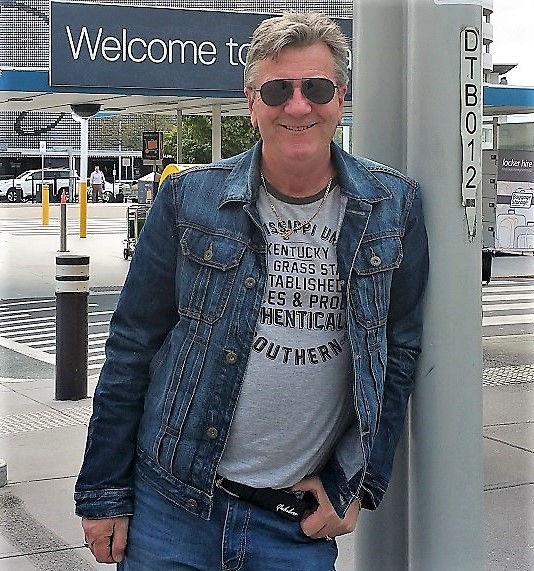 ‘Venus’ the bull dog mascot of the destroyer HMS Vansittart, during WW2.

Painted with acrylic paint on canva, and like all my paintings, wiring is put on the wooden structure, with the panting being delivered ready to hang on the wall. 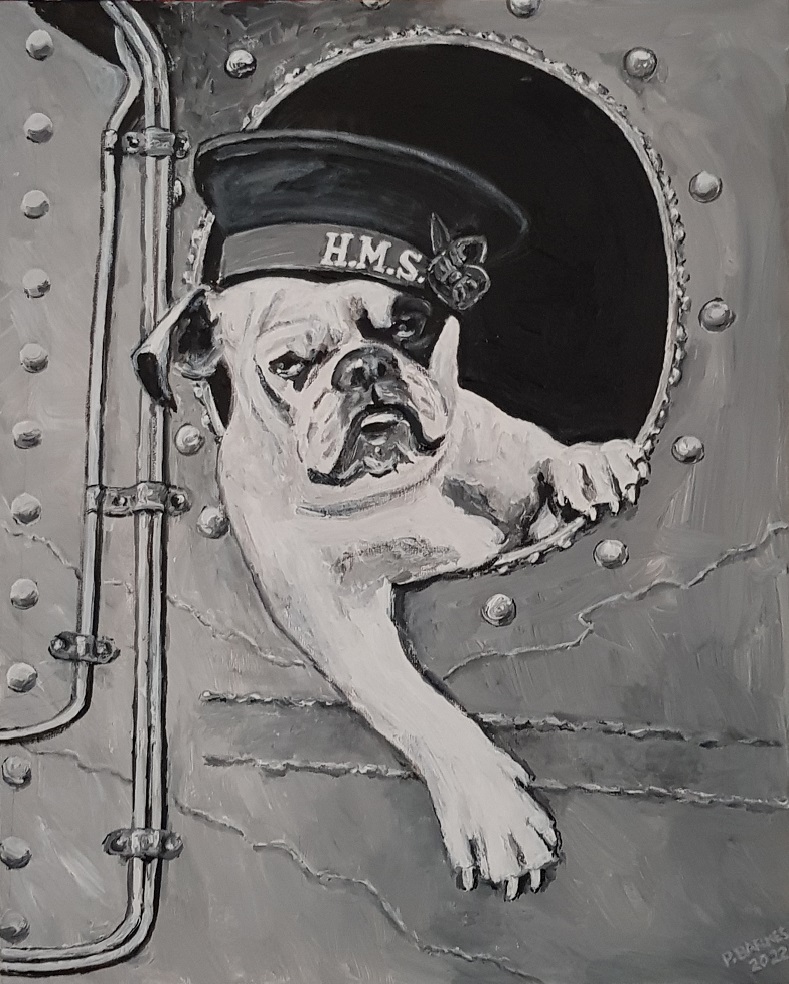 He was an Australian soldier in WW1 with the 54 Battalion.
It was painted for his 81 year old son John. A commissioned painting. 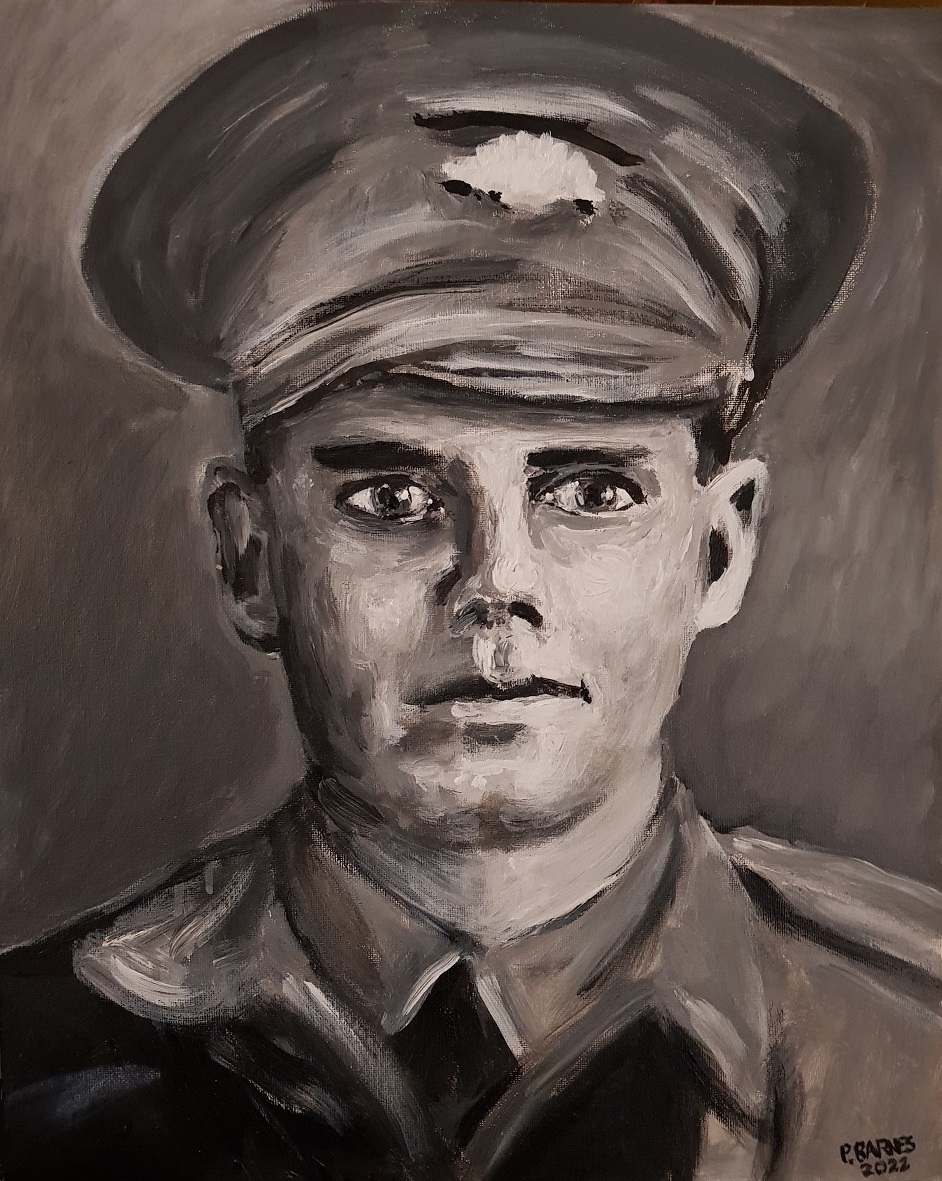 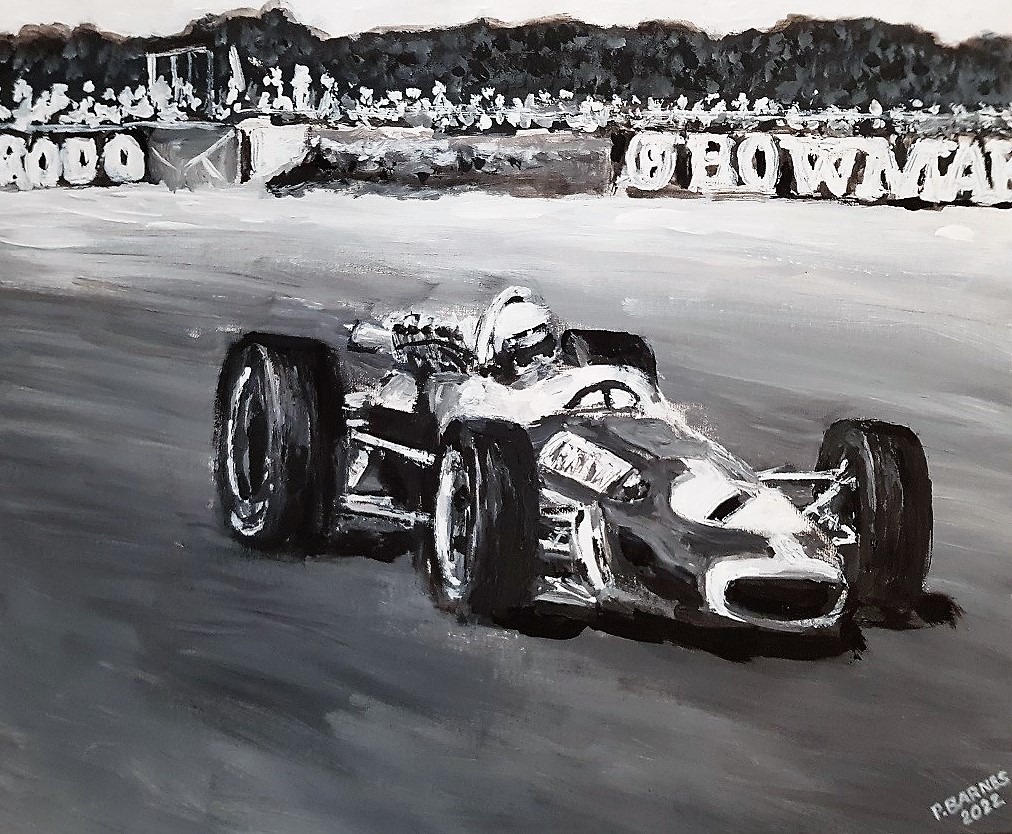 Painted with acrylic paint on canvas. 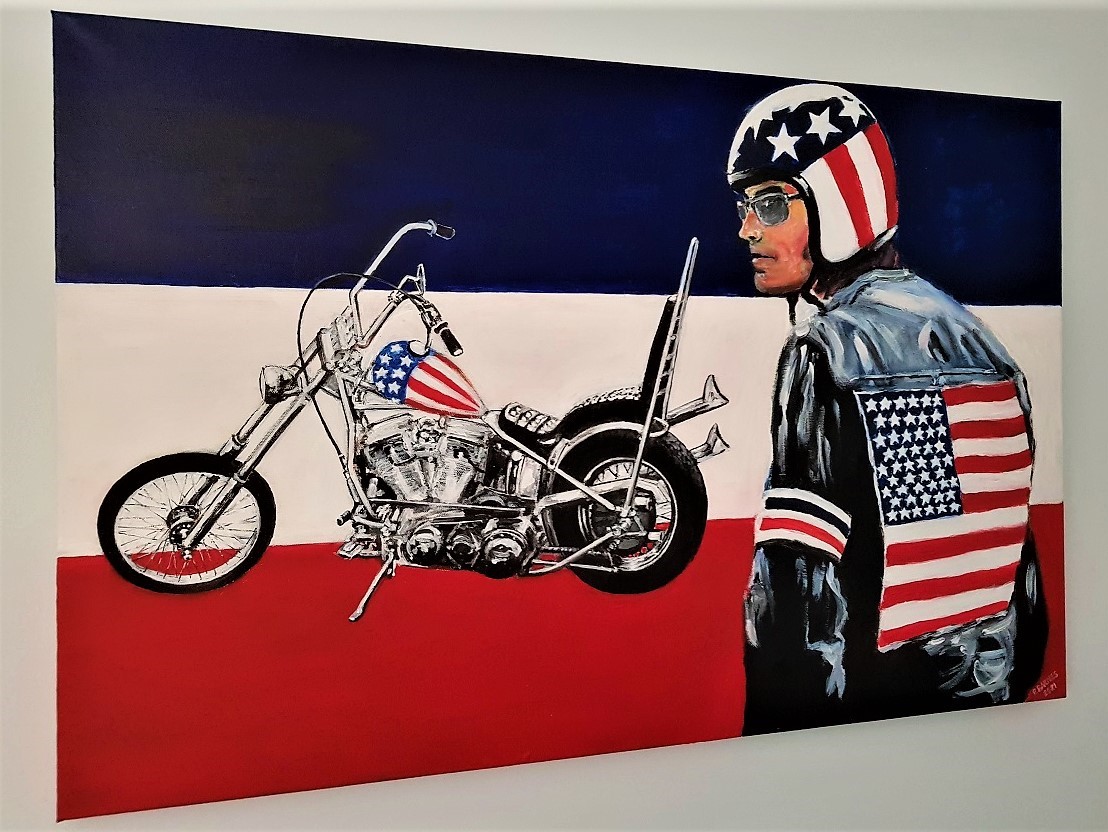 The first one he painted, is ‘DESOLATION – WESTERN FRONT‘ – 1 metre x 70 cm, in 2015, and is of Australian soldiers from the 4th Division AIF field artillery walking on a duckboard track passing through Chateau Wood during the Battle of Passchendaele on the Western Front. It was sold in 2020.  Don’t miss out on this one… it is for sale for $900, plus shipping … call Peter on 0418 82 7756 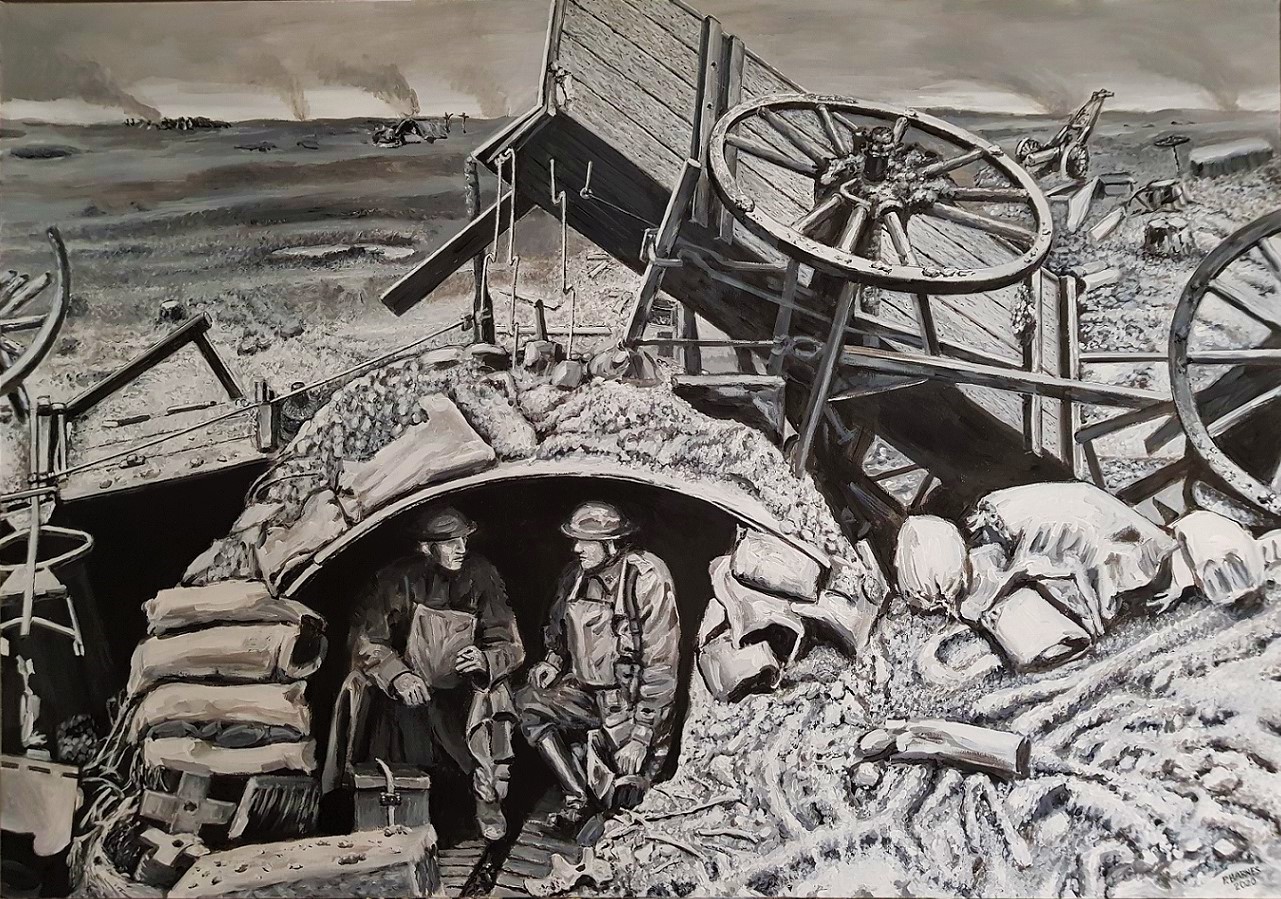 The painting is titled ‘AFTERMATH’ (2020) Size 90CM x 60CM – painted with acrylic on canvas. Peter decided to paint it largely based on a photograph he took of a diorama at The Spirit of ANZAC Centenary Experience travelling exhibition when it came to Adelaide in 2016.

He included a water bottle, representing life, and a rifle, representing death. The soldier is obviously traumatised and the painting tries to show another side of the aftermath of war… with many of the survivors of war greatly damaged by their experiences and what they have witnessed.  The painting is for sale for $900 plus shipping… call Peter on 0418 82 7756 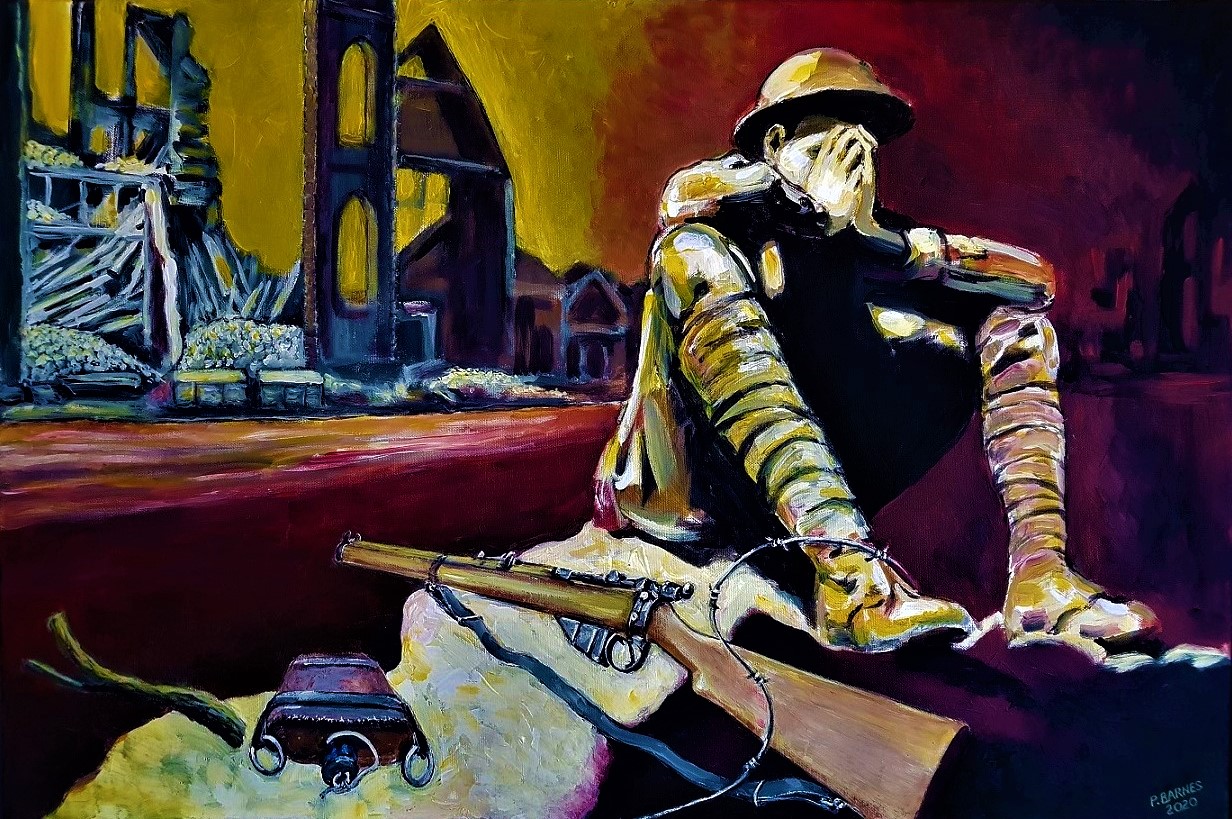 Painted with acrylic on canvas. It is painted in acrylic on canvas and is a commissioned portrait.

The person asked me to paint his portrait. He is definitely a warrior. His experience: 42 years of soldiering, either in uniform or armed contractor, humanitarian landmine clearer and technical adviser.

If you would like to commission Peter to paint a portrait, please contact him in Australia on 0418 82 7756. The extraordinary painting is of Pilot Officer Rawdon Middleton, VC.

Painting title: ‘TRUE TO THE END‘.

Painted in acrylic paint on canvas.

The painting features his plane, grave and portrait, in the area he flew. One of a kind painting that focuses on one of Australia’s greatest war heroes. 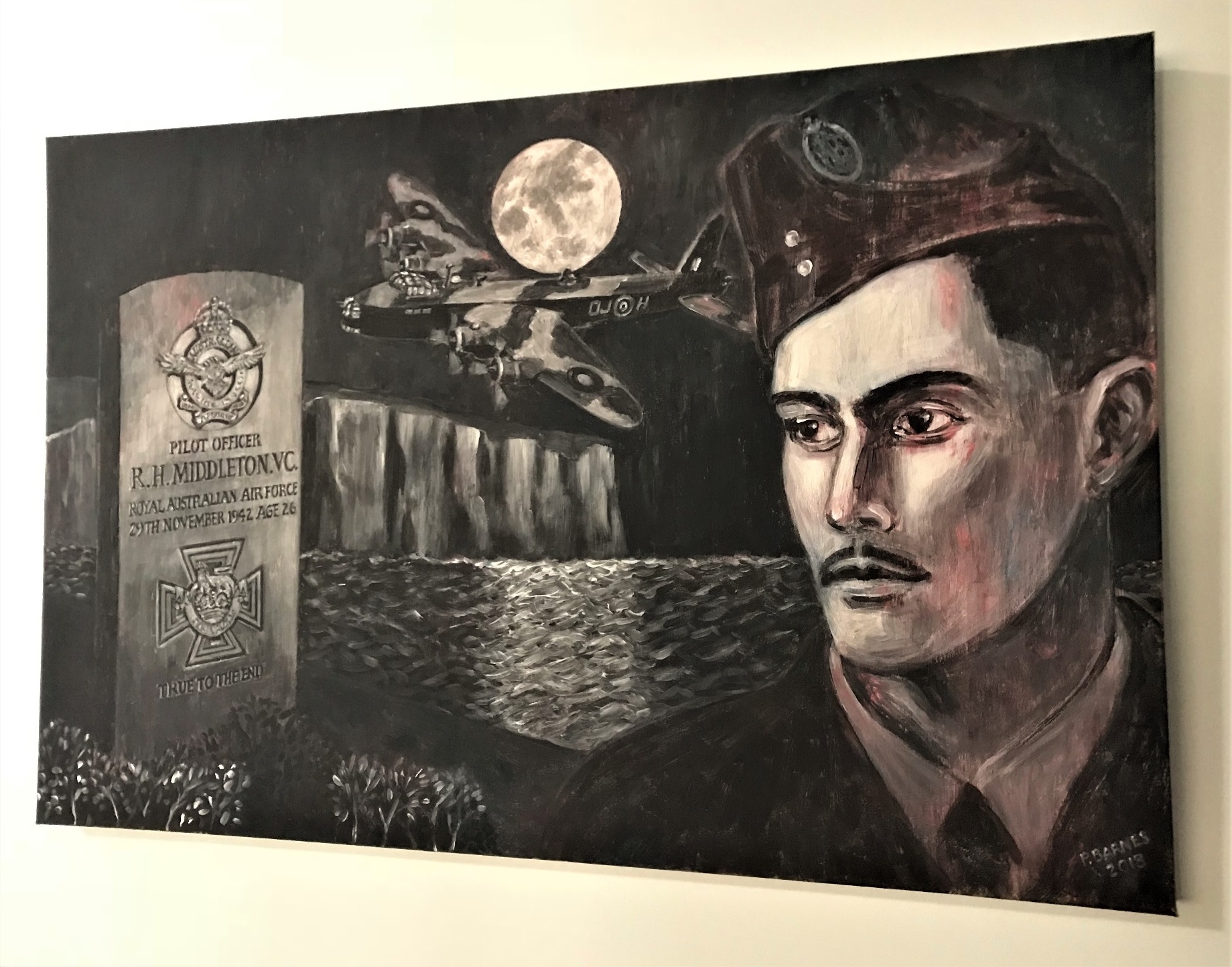 It is painted in acrylic on canvas. The drawing by Peter is 51 years old. 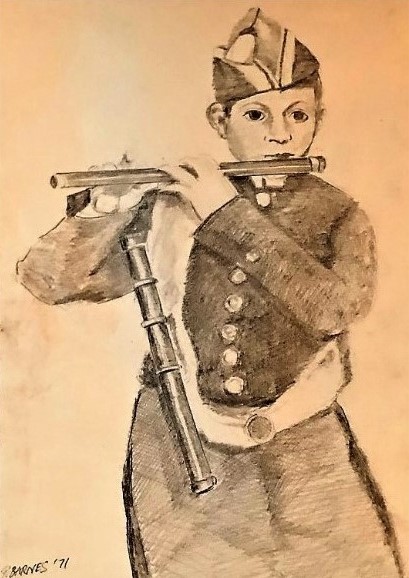 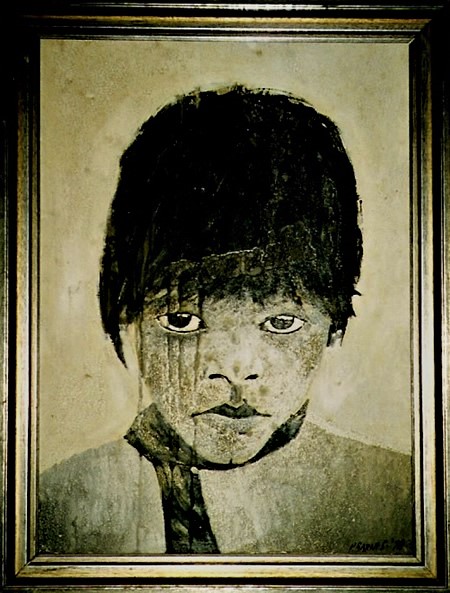 Peter chose to paint the photograph of Smoky the famous WW2 war dog.

Smoky was credited with twelve combat missions and awarded eight battle stars. She survived 150 air raids on New Guinea and her owner credited Smoky with saving his life by warning him of incoming shells on an LST (transport ship), calling her an “angel from a foxhole.” Peter chose to paint the famous WW2 photograph taken on the 30th of July 1943 of Corporal Leslie (Bull) Allen MM, aged 26 of Ballarat, Victoria, carrying out a wounded American soldier down the slopes of Mount Tambu, New Guinea, during the Wau – Salamaua campaign, one of 12 he retrieved.

He was awarded the US Silver Star and had already received his Military Medal (MM) on the 7th of February 1943, at Crystal Creek, Wau .(He was born in Ballarat in 1916 and died in Ballarat in 1982).

This is one of Peter’s greatest paintings. If you would like to commission Peter to do a painting, contact him in Australia on 0418 82 776.

The painting has been sold. It is an original Australian painting. It is painted with acrylic on canvas.

With the 100th anniversary of the ending of WW1 on Remembrance Day, 11th of November 2018, it was decided to do a painting of a field of poppies.

A very poignant painting.  The painting is not for sale. 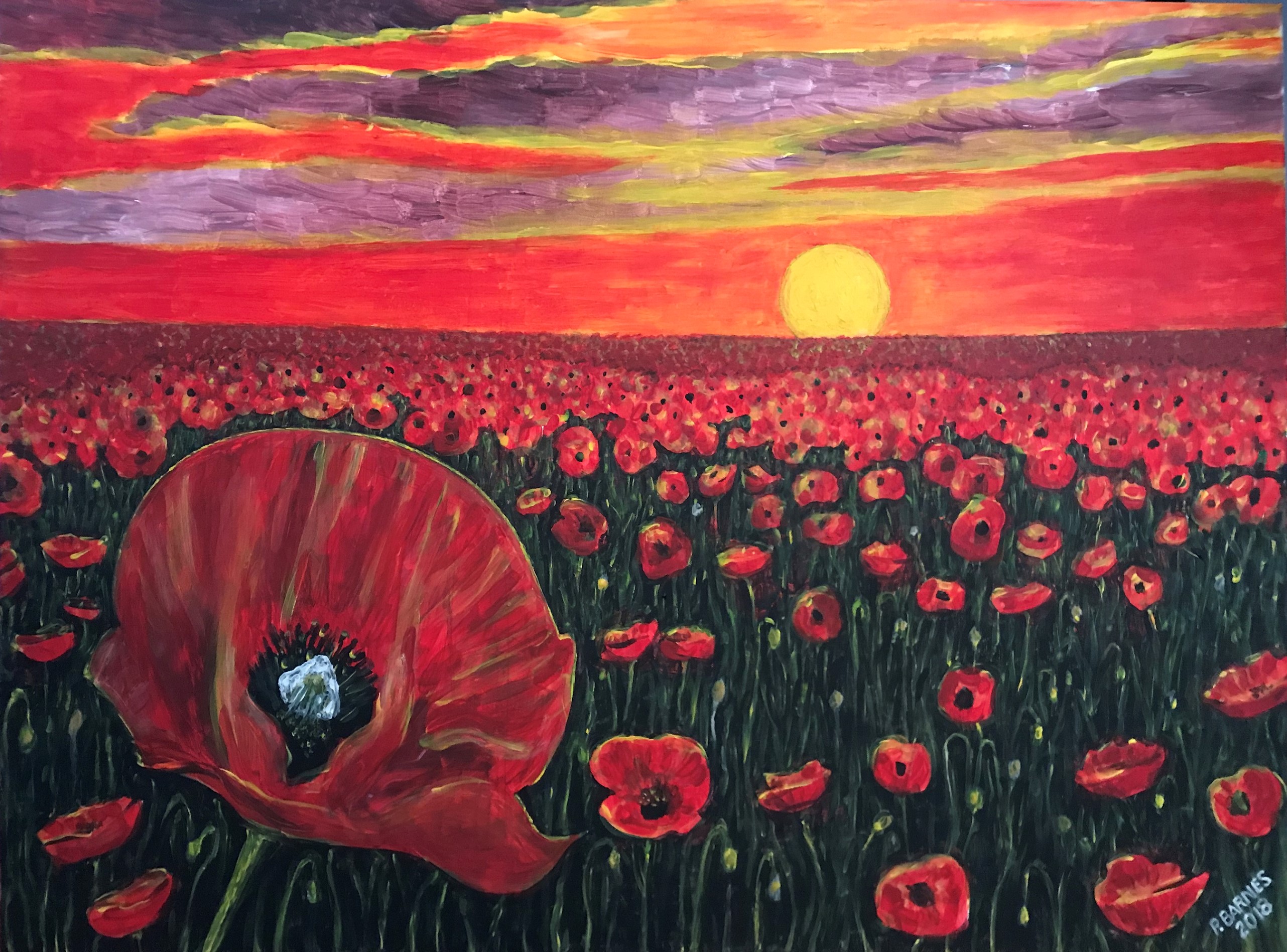 The painting is titled ‘MATESHIP’ (2015) – 100 CM X 100CM. The WW1 painting is based on an iconic Gallipoli photograph of a soldier carrying a wounded mate.

Mateship is a defining character within the Australian nation and its military. The painting was created with acrylic paint.

Paintings that feature mateship in war time are very popular, and if you would like to commission a painting, don’t hesitate to contact Peter on 0418 82 7756.

It is an original Australian painting. This painting is sold. The painting is not for sale.

If you would like to commission Peter to do a painting, please contact him in Australia on 0418 82 7756. The WW1 painting was created with acrylic paint.

A famous WW1 photograph by the well known official war photographer Captain Frank Hurley, was the inspiration for this painting.

The painting has a 3D effect which made it even more compelling.

The painting is sold.

The WW1 painting was created with acrylic paint using a knife and brush work.

Peter wanted to capture the look of a soldier who had experienced the horror of war.

Also, Peter didn’t want the painting to be perfect, meaning he wanted a rough feel to it so that’s why he used a knife to paint it as well as a brush.

They say the eyes are the windows to the soul..

The painting is for sale for $450, plus shipping. It is the first painting in Peter’s series of paintings featuring Australians in war time. It is a very unique painting and has an incredible presence… call Peter on 0418 82 7756. The Ned Kelly painting was created with acrylic paint on canvas.

One of the most asked about paintings by Peter.

The painting is not for sale. The contemporary painting was created with enamel paint on canvas. It is painted in enamel on canvas. 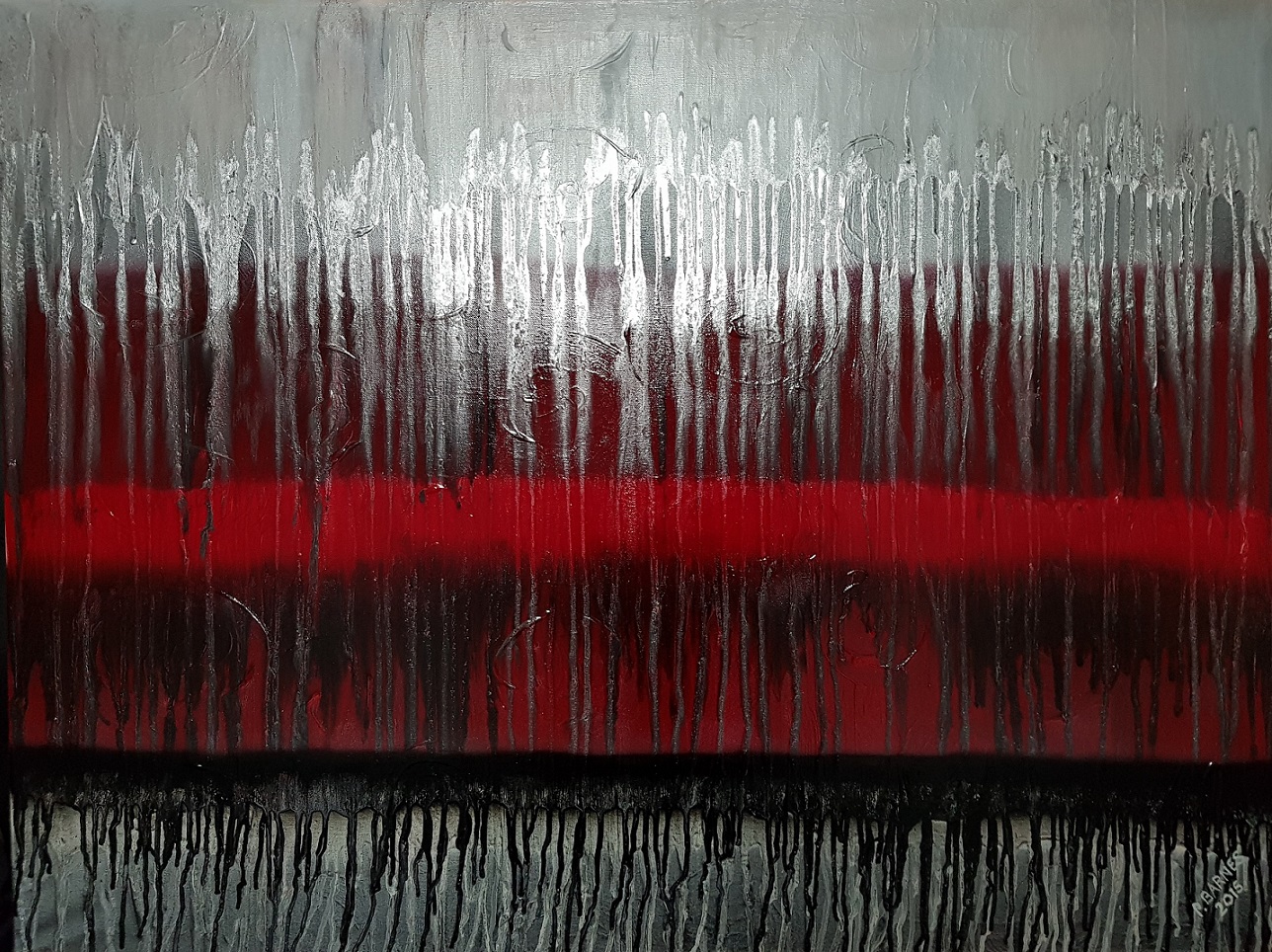 Painted in acrylic on canvas.

Something different and compelling.